We are already in February! It's hard to believe.  During this past month, we've been a part of the AZ Indian Nations and Tribes Legislative Day, the Wiring the Rez Conference, and lectures here at ASU.

Thanks for taking the time to catch up with what's going on both in the nation and in the state with regard to Indian Country.  We try to bring you the most relevant and timely information about happenings.

The highlight of this month was an invitation to attend the Inauguration Festivities at Gila River Indian Community for Governor Stephen Roe Lewis and Lt. Governor Robert Stone.  We were honored to attend and we were part of an ASU cohort, as Dr. Michael Crow, ASU's President, was the Keynote Speaker at the event. 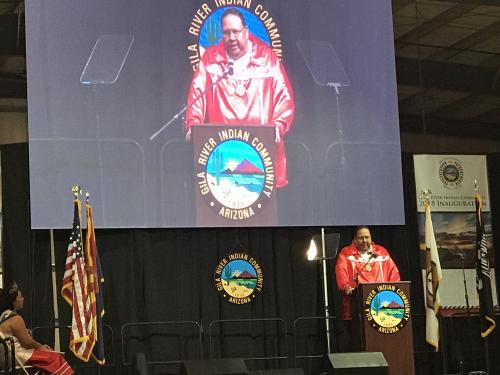 Held annually in accordance with Arizona State Statute, The Arizona Office on Tribal Relations, in cooperation with area Native American tribes, hosted the 23rd Annual Indian Nations and Tribes Legislative Day at the Arizona State Capitol on Wednesday, January 10, 2018.  AIPI was in attendance and cohosted an information booth with other ASU offices.

The event included a Joint Protocol Session at the AZ House of Representatives, a Luncheon, Informational Sessions, Exhibitor Fair, Native Youth Workshop, and an Open House by the AZ School Facilities Board. 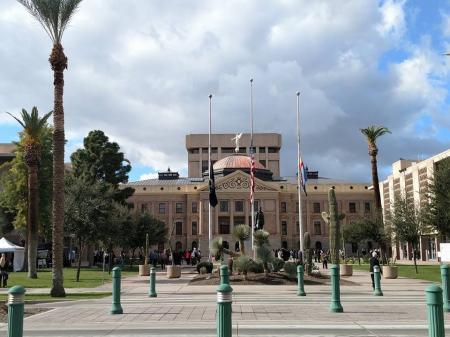 Background
The First Responder Network Authority (FirstNet) was created in February 2012 to establish a nationwide, interoperable broadband communications network dedicated to public safety users. The network was established to allow police officers, firefighters, emergency medical service professionals, and other public safety officials to communicate with each other across agencies and jurisdictions. In October 2017, FirstNet adopted a Tribal Consultation Policy that became effective in January 2018, enabling Tribal Nations to request direct government-to-government consultation with the FirstNet Authority for the first time since it was established in 2012.

This conference is held annually and explores the issues surrounding the development of Tribal Digital Sovereignty and E-Commerce in Indian Country including: jurisdictional complexities and the necessity of fostering open dialogue with federal and state counterparts, the changing political landscape, the possible implications to tribal sovereignty, and the ongoing need for tribes to finance and build infrastructures that facilitate economic growth on their reservations while complying with appropriate federal guidelines.

It is insightful as the attendees come from a diverse pool, including attorneys, scholars, financiers, gaming experts, and tribal leaders share strategies and practical implementations of diverse business models of current and for future e-commerce and infrastructure enterprises in order to work towards bridging the digital divide.

On Wednesday, January 17, 2018, AIPI Director spoke at the ASU School for the Future of Innovation in Society. SFIS hosts the enLIGHTenING Luncheon, which is a monthly lunchtime talk series with speakers from around the ASU campus.  Morris spoke about the AIPI's policy and research priorities, as well as Tribal telecommunications issues such as the digital divide.

The event was well attended, with over 50 members of ASU staff, faculty, and graduate students from various departments.  Morris is affiliated faculty in the SFIS.
News Link:
AIPI February 2018 Newsletter