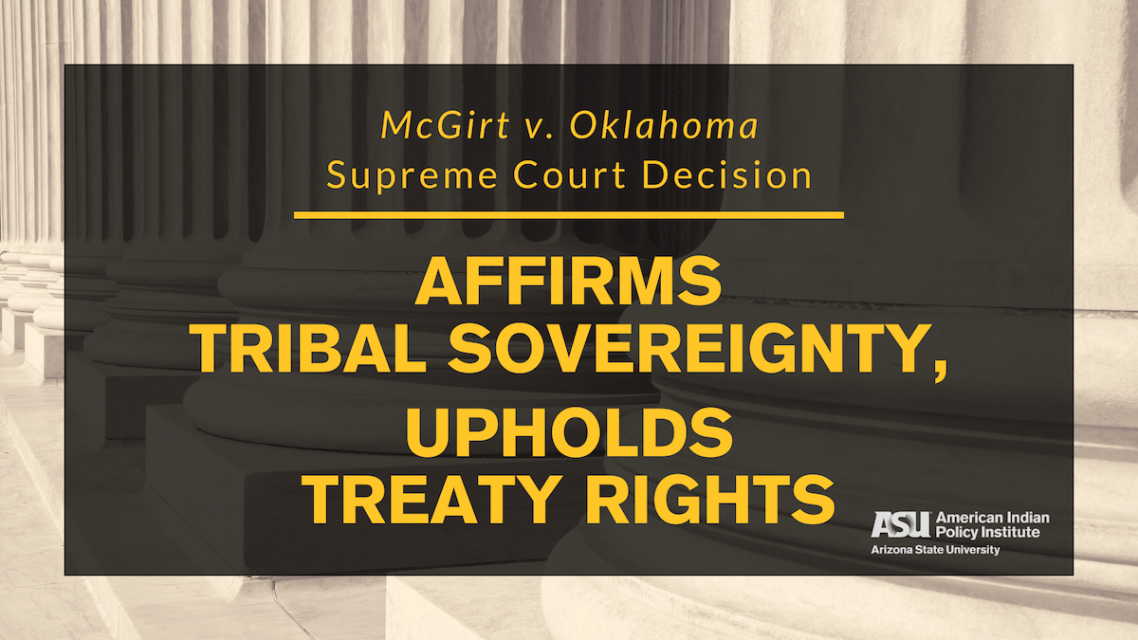 Writing for the majority, Justice Gorsuch framed the case in historical context:

On the far end of the Trail of Tears was a promise. Forced to leave their ancestral lands in Georgia and Alabama, the Creek Nation received assurances that their new lands in the West would be secure forever. In exchange for ceding “all their land, East of the Mississippi river,” the U. S. government agreed by treaty that “[t]he Creek country west of the Mississippi shall be solemnly guarantied to the Creek Indians.” Treaty With the Creeks, Arts. I, XIV, Mar. 24, 1832, 7 Stat. 366, 368 (1832 Treaty).

With echoes of Chief Justice Hugo Black’s dissent in Federal Power Commission v. Tuscarora Indian Nation that “[g]reat nations, like great men, should keep their word” when the Court ruled that tribal land could be condemned, the Court in McGirt explained that it was upholding the Muscogee (Creek) Nation’s treaty reserved rights, stating:

Today we are asked whether the land these treaties promised remains an Indian reservation for purposes of federal criminal law. Because Congress has not said otherwise, we hold the government to its word.

Today’s decision is a significant win for the Muscogee (Creek) Nation and for Tribal Nations across the country. With the Muscogee (Creek) Nation facing opposition from the Trump Administration, this Court made clear that treaties mean something – that they are the supreme law of the land. Only Congress, not states or the courts, can change reservation boundaries but only if Congress clearly expresses its intent to do so. The Court concluded that Congress had not expressed a clear intent to change the boundaries of the Tribe's reservation and therefore the State did not possess criminal jurisdiction over McGirt.

The Supreme Court today kept the United States’ sacred promise to the Muscogee (Creek) Nation of a protected reservation. Today’s decision will allow the Nation to honor our ancestors by maintaining our established sovereignty and territorial boundaries. We will continue to work with federal and state law enforcement agencies to ensure that public safety will be maintained throughout the territorial boundaries of the Muscogee (Creek) Nation.

The United States Attorneys in Oklahoma

As Oklahoma’s United States Attorneys, we are confident tribal, state, local, and federal law enforcement will work together to continue providing exceptional public safety under this new ruling by the United States Supreme Court.

The State, the Muscogee, Cherokee, Chickasaw, Choctaw, and Seminole Nations are committed to ensuring that Jimcy McGirt, Patrick Murphy, and all other offenders face justice for the crimes for which they are accused. We have a shared commitment to maintaining public safety and long-term economic prosperity for the Nations and Oklahoma.

Today, the Supreme Court provided a long-awaited ruling on McGirt v. Oklahoma on an issue concerning the Five Tribes of Oklahoma and all Oklahomans. We are reviewing the decision carefully and stand ready to work with both tribal and state officials to ensure stability and consistency in applying law that brings all criminals to justice. Indeed, no criminal is ever exempt or immune from facing justice, and we remain committed to working together to both affirm tribal sovereignty and ensure safety and justice for all Oklahomans.

McGirt is the latest in a long-standing body of Supreme Court decisions reaffirming that the Court will not diminish or disestablish reservation boundaries unless Congress has clearly expressed an intent to do so.  The Court’s decision today provides clarity and certainty that will promote good governance and collaboration between Tribal, Federal and State sovereigns.