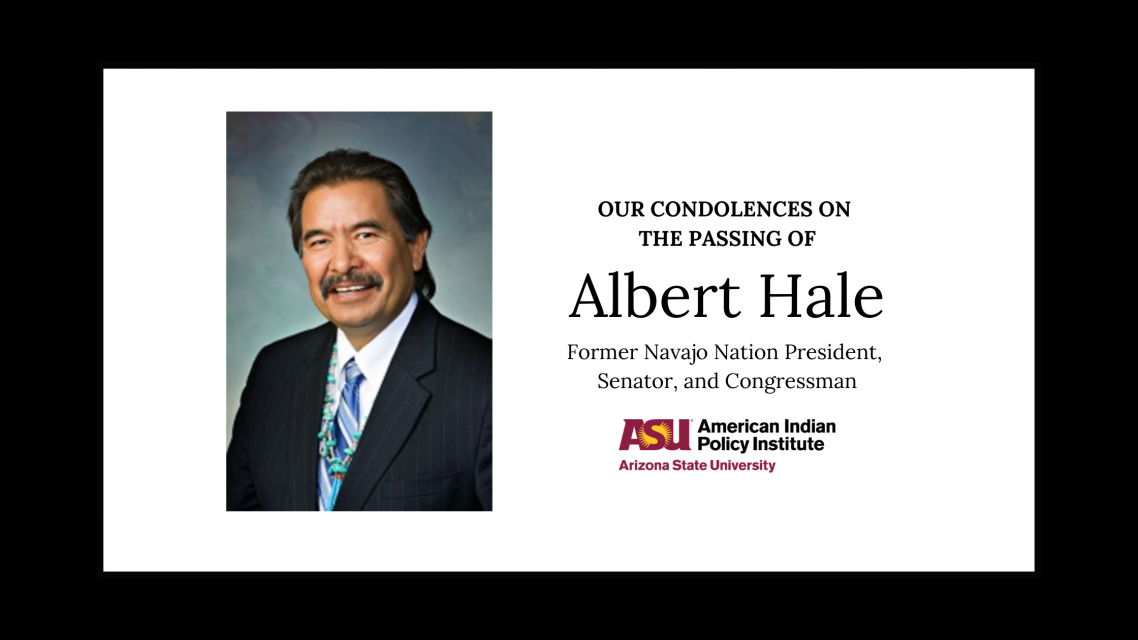 The AIPI are saddened to hear of the loss of Arizona state lawmaker and former Navajo Nation President, Albert Hale. Hale’s dedication to public service is an inspiration to all of us and will continue to influence our work. We extend our deepest condolences to his family and loved ones during this difficult time. We join those who mourn his loss, and we want to take a moment to recognize a few of Hale’s many significant accomplishments.

Hale was born in 1950 on the Navajo Nation in Ganado, AZ. He graduated from Fort Wingate High School, a Bureau of Indian Affairs (BIA) boarding school at the time. He went on to earn a Bachelor’s degree from Arizona State University and a Juris Doctor (JD) from the University of New Mexico School of Law. Early in his career, Hale worked on behalf of uranium miners and their families, culminating in the eventual enactment of the Uranium Miners Compensation Act. His extensive legal works spanned several decades across Indian Country, including Attorney General, Special Counsel, Tribal Court Judge, while also serving community members through his own private practice.

Hale was a leader and an elected official. He served one term as Navajo Nation President from 1995-1998. Upon leaving office, he went on to work in a critical role to negotiate and secure Navajo water rights in New Mexico. Later in his career, Hale was elected as an Arizona State Senator from 2004 to 2011 and served the Arizona House of State Representatives from 2011 to 2017. During his time in the Arizona Legislature, Hale played several vital roles by offering his expertise to Arizona tribes. His accolades include being a member of the Energy, Environment, and Natural Resources Committee and as an organizer of the Arizona State Legislature Native American Caucus. Arizona’s Indigenous communities will greatly miss Hale’s work. We will continue to emulate his leadership and his stellar work ethic in all that we do.