A Weekend at Tribal Wireless Bootcamp 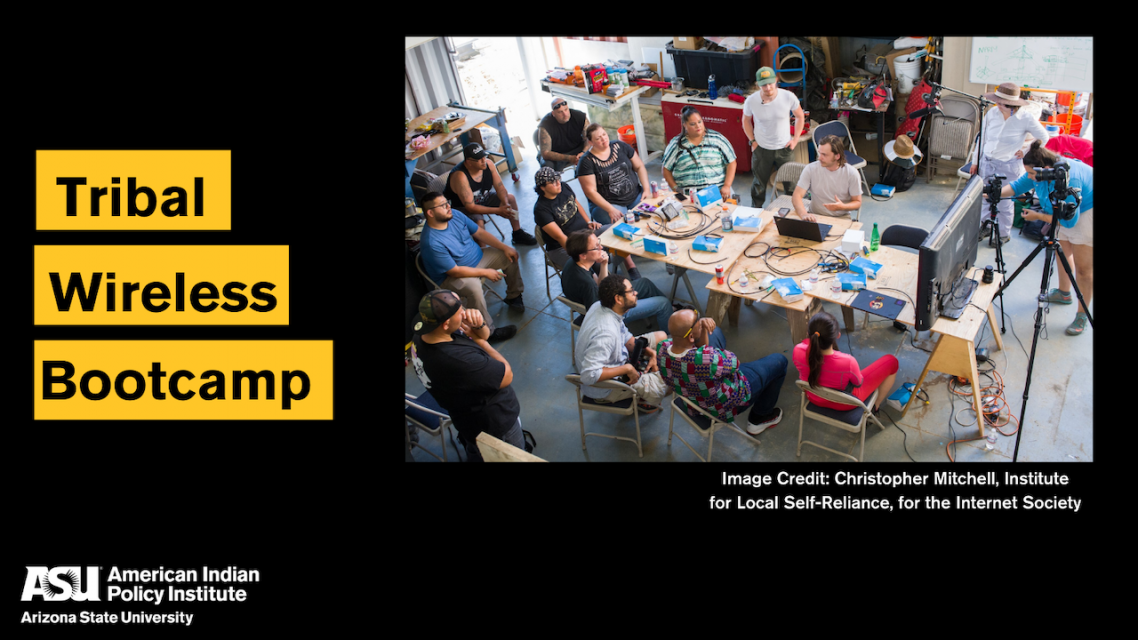 Knowing how technology works on the ground is key to successful broadband policy and research. To increase my own knowledge to better serve Tribal Nations through AIPI’s work, I spent the July 4th weekend at the Tribal Wireless Bootcamp at Rantanen Ranch in Southern California. The bootcamp was a chance to learn firsthand how Tribes can deploy their own wireless internet networks.

The Tribal Wireless Bootcamp was funded by the Internet Society, and my role was to determine the replicability of the bootcamp. To gather more information and insight, AIPI is surveying the participants of the bootcamp to learn their perspectives. Before the in-person bootcamp, the organizers hosted a series of virtual training sessions to get everyone up to speed on spectrum-related issues, and provided a general overview of what we would be working on at the bootcamp.

Before I delve into the specific activities from the bootcamp, it would be helpful to explain what spectrum is, and why it is significant for Native Nations to manage spectrum as part of the Federal trust responsibility.

Wireless internet service depends on the electromagnetic spectrum. This is a natural resource that is managed by the Federal Communications Commission (FCC). In the U.S., Spectrum is divided into bands and licensed mainly among the Federal Government, industry, and the public. Within Native Nations, there is a growing movement toward spectrum sovereignty, which is the idea that 1) Native Nations should have control over the spectrum on Tribal lands; and 2) the spectrum should be subject to the Federal trust responsibility. The overarching goal is that spectrum  should be managed to benefit Native Nations. The National Congress of American Indians (NCAI) continuously requests a Tribal Priority, a chance for Native Nations to request a spectrum license, before the FCC allocates bands of spectrum to others.

In 2013, for the first time, the FCC created a Tribal Priority for spectrum, applying it to FM Radio. Based on this precedent, in 2020, the FCC opened up a Tribal Priority Window for the 2.5GHz band. This used to be licensed for educational purposes, but it is now also used for wireless internet, especially in rural areas. The FCC expected only a few applicants for a handful of licenses, but now more than 400 licenses have been granted to Native Nations across the country. This life changing service has opened up a revolutionary opportunity for Tribal broadband. When we all met in-person, there was already camaraderie from the virtual training sessions. Together we all practiced crimping ethernet cables and configuring wireless equipment. The trainers led us through how to use simple GIS programs to build network maps. We learned how to set up point-to-point connections and the differences among providers of wireless equipment. We also learned about the capabilities of LTE and multi-point connections. These trainings were led by community wireless network practitioners who had experience setting up networks in diverse terrains─ something that is very applicable in rural Tribal lands. Each day of the training, we built better relationships and learned best practices in wireless networks. The goal of this bootcamp was to leave participants with more knowledge and skills than we came in with, and to build relationships among the group. After three days outside in 100+ degree weather, we certainly had developed into a tight network of people. Together we built up a base of community knowledge from which we could all draw from when we returned to our home communities. We left the bootcamp feeling excited to bring back what we had learned, the new ideas that we developed, and the relationships we built back to our communities.

Needless to say, we are already looking forward to the next Tribal Wireless Bootcamp where we can continue to build our skills to better serve Native Nations. H. Trostle (they/them) is a citizen of the Cherokee Nation and a Research Professional at the American Indian Policy Institute at Arizona State University. Their research is primarily on Tribal broadband. They have a Master’s in Urban and Environmental Planning from Arizona State University where they focused on Indigenous Planning. Their recent report, Building Indigenous Future Zones: Four Tribal Broadband Case Studies (funded by the Internet Society) is available online through the Institute for Local Self-Reliance.