E-Rate Program To Include Tribal Libraries 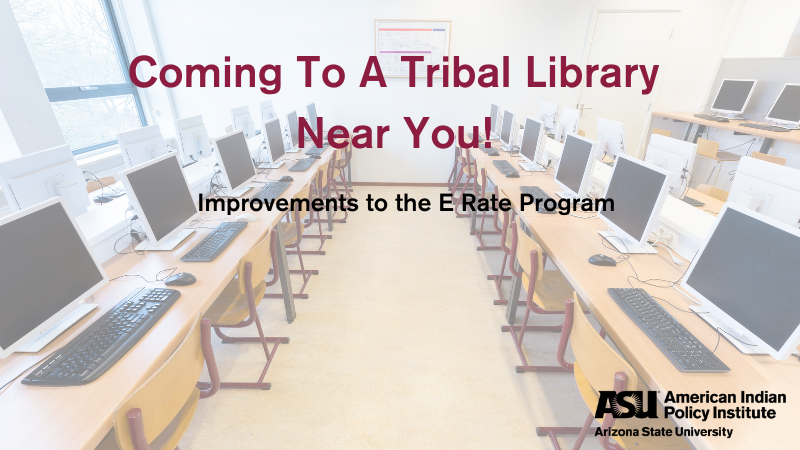 After years of advocacy, the FCC is finally taking action to make needed improvements to the The Universal Service Program for Schools and Libraries, also known as E-rate. On October 14, 2021, the FCC published a notice in the Federal Register of a proposed rule to make Tribal libraries eligible to participate in the E-rate program. The program was established under the Federal Communications Commission (FCC) in the Telecommunications Act of 1996. This program uses funding from the Universal Service Fund to increase internet access to qualifying schools and libraries by assisting with discounted telecommunication service. Internet access in schools and libraries is a crucial service offered in both rural and urban communities and internet access has become absolutely essential during the COVID-19 pandemic.

There is an outstanding need for Internet connectivity in Tribal communities, and all possible opportunities to increase internet access are crucial. However, Tribal libraries do not always fit the program’s narrow library definition and they often miss out. The E-rate program defines schools and libraries according to a State’s criteria rather than recognizing the unique nature of Tribal libraries. Tribes and Tribal organizations recognized that the E-rate program was not designed to help Native communities since the it's inception, and have long advocated for needed changes.

The National Congress of American Indians approved a resolution to support the creation of a Tribal Priority aspect to the E-rate Program in 2014, and the Association of Tribal Archives, Libraries, and Museums also released their own brief outlining needed changes to the program. Tribal input over the years have also emphasized the need for Tribes to have the ability to designate their own Tribal libraries that would qualify for E-rate because libraries take many forms in Tribal communities. Our own Executive Director, Dr. Traci Morris also recently shared some of the history of Tribal libraries and the various needs they serve in Tribal communities.

The proposed rule looks to correct this long-standing issue and better serve Tribal libraries. However, the definition of Tribal libraries is not stated in the rule change notice. Tribes should still submit comments to make sure that their needs are considered for this important rule change. Written comments will be accepted until November 15, 2021. Details on how to submit written comments, or contact info for any questions can be found on the Federal Register Notice. Please continue to follow AIPI for updates on bridging the digital divide in Indian Country and visit our Tribal Broadband Resources page for more information.