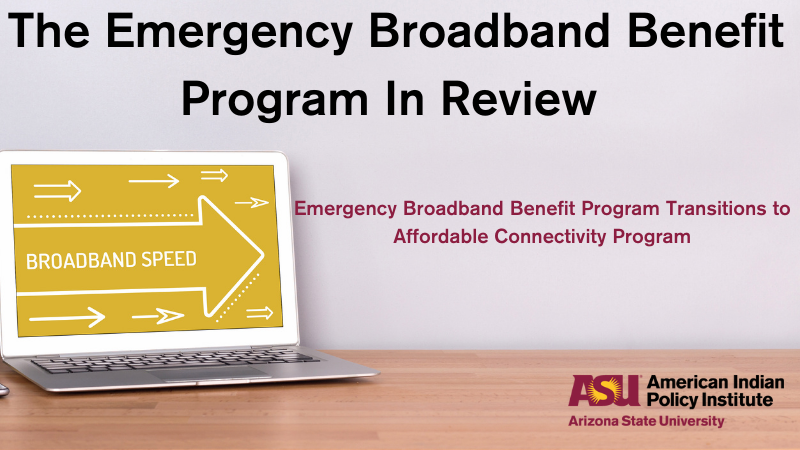 As the Federal government transitions to the Affordable Connectivity Program, it is worth analyzing the impact of the Emergency Broadband Benefit Program. The Emergency Broadband Benefit program (EBB), established under the Consolidated Appropriations Act of 2021, began accepting applications on May 12, 2021. The Federal Communications Commission (FCC) created the program to establish greater accessibility to broadband internet by providing discounted broadband service as well as discounts on broadband enabled devices to qualifying low-income households. Broadband access arose as a top priority in the last two years and accessibility inequities across the nation were especially highlighted in the wake of the COVID-19 pandemic. This update will offer insight into the program’s impact on Indian Country by giving an overview of recent changes within the program as well as by taking a look at data collected since the program's inception.

From EBB to ACP

Although the program was initially meant to be temporary, it has been extended indefinitely through the Infrastructure Investment and Jobs Act (IIJA). The IIJA appropriated more funding and made key program changes. One of these key changes was that the EBB was renamed to the Affordable Connectivity Program (ACP). Going forward, this blog will refer to the program's new ACP name. The ACP was initially funded for $3.2 billion and the original round of funding offered a subsidized benefit of $50 a month for broadband service to qualified applicants and $75 a month for qualified applicants living on Tribal Lands. This first version of the program also offered a one-time benefit of up to a $100 discount off of broadband devices when eligible applicants contributed $10 - $50 towards a device.

An article from the Benton institute for Broadband & Society found that as of July 2021, enrollment in the ACP was low. Benton found that overall, only 1 in 12, or approximately 8% of eligible households in the U.S. have enrolled in the ACP. The Technology Policy Institute’s analysis of early ACP data showed that as of July 2021, some areas of Indian Country showed high ACP enrollment. One of these early high enrollment areas is Apache County, AZ, which mostly lies within the Navajo Nation. Apache County had 54% of eligible households participating in the ACP by July 2021. The Universal Service Administrative Co. (USAC) releases its data on ACP enrollment on a regular basis on its website, and as of December 12, 2021, the USAC website reports that 136,383 Tribal households have enrolled in the program thus far.

The Universal Service Administrative Company provides continuous statistics on the Emergency Broadband Benefit program. Data can be accessed here. It can be further processed through GIS programs by researchers.

Brian Whitacre at Oklahoma State University initially shared a map of his analysis of Oklahoma with the National Digital Inclusion Alliance listserv, and then Whitacre supplied the American Indian Policy Institute (AIPI) with a map that included Tribal boundaries. The link to the map below shows how many eligible households signed up for EBB by zip code as of August 1, 2021. The map shows a concentration of enrollment in Tribal areas.

To provide a comparison, AIPI Researcher, H Trostle repeated Whitacre’s work with the November 1, 2021, data. Both Whitacre and Trostle estimated the percentage signing up for the program: They compared the number of enrolled households with the total number of households at the 200 percent poverty level, which served as the proxy for eligible households. Households qualify for the benefit at the 185 percent poverty level, but that level was not available with Census data. The benefit also has a number of other ways that households can qualify. This is an approximation This analysis also excluded zip codes where little to no data is currently available for that month. Between August 1st and November 1st, the state average increased by 10 percentage points. Participation is still concentrated in Tribal areas, especially in the Creek (Muskogee) Nation and Cherokee (Tsalagi) Nation.

To develop a further understanding of how Native households have enrolled in EBB, Trostle also created a map of Arizona. The map highlights how the zip codes with the most enrollment are those on Tribal lands with more than 50 percent of estimated eligible households participating. This is much higher than the state average of 35.8 percent. The entire northeast corner of the state, where the Navajo Nation is located, has seen high participation in EBB.

These maps confirm the findings of the Technology Policy Institute: There is high Tribal enrollment in EBB. Zip codes situated within Tribal lands show a higher percentage of signing up for the program. People who qualify for the program are more likely to have actually enrolled on Tribal lands. The Universal Service Administrative Company notes that 138,018 Tribal households are enrolled in the program as of December 26, 2021. (Note: Total enrollment weekly data is updated more quickly than the monthly data used for the maps).

With the ongoing transition from EBB to ACP at the federal level, researchers at AIPI will continue to monitor changes in Tribal enrollment in these subsidized broadband programs. In particular, researchers will look out for decreased enrollment as eligibility criteria tighten for ACP. With ongoing outreach efforts around ACP by many advocacy organizations, AIPI will also explore if there is increasing parity between Tribal and non-Tribal lands. It is important to monitor the transition from EBB to ACP in order to determine the effectiveness of the program.