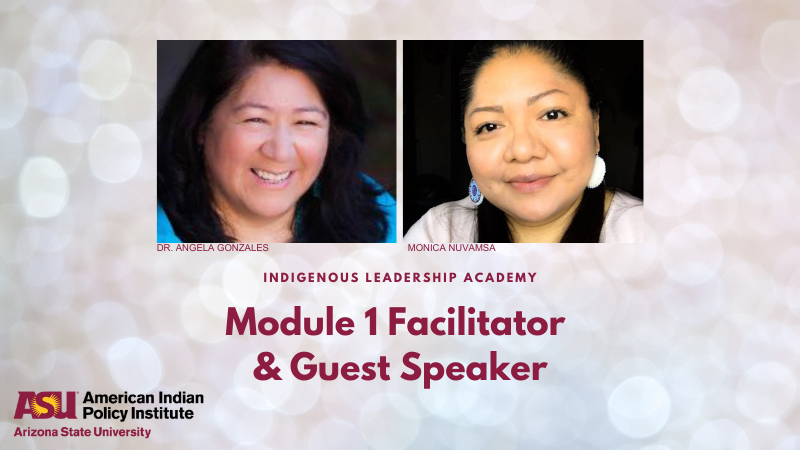 Angela Gonzales (Hopi), is an Associate Professor in the School of Social Transformation and inaugural Fellow in the American Indian Policy Institute’s Thought Leaders Program at Arizona State University. As a community-engaged, interdisciplinary scholar, her research interests cut across and integrate the fields of Sociology, Indigenous Studies, and Public Health. Over the past two decades, she has engaged in a number of community-based research projects with tribal communities. Her research has been supported by the National Institutes of Health, the National Science Foundation, and the Ford and Russell Sage Foundations. Dr. Gonzales holds a Ph.D. in Sociology from Harvard University, a master’s degree from the Harvard Graduate School of Education, and a bachelor’s degree in Sociology from the University of California, Riverside. She currently serves on the Board of the Colorado Plateau Foundation, a Native-led foundation that invests in Native-led organizations working on the protection of water and sacred places, preservation of Native languages, and sustainable community-based agriculture. She is also the current President of the Society of Senior Ford Fellows and Chair of the American Sociological Association Section on Indigenous Peoples and Native Nations. As an enrolled member of the Hopi Tribe from the Village of Shungopavy, she is committed to research that supports participatory research to develop community capacity and relationships of trust and reciprocity between tribal partners and academic researchers.

Monica Nuvamsa (Hopi), is a member of the Water Cloud Clan from the Village of Songoopavi. She received her Bachelor’s in Psychology and American Indian Studies from the University of Arizona in 1997 and a Certificate in Nonprofit Leadership from the Arizona State University Lodestar Center for Philanthropy and Nonprofit Innovation in 2012. Monica currently serves as the Executive Director of The Hopi Foundation, whose work is to promote local philanthropy and community development. Her experience includes local community grantmaking, nonprofit and community capacity building, community leadership development, and community organizing. Monica’s early career experiences include developing and managing the Hopi Tribe’s Domestic Violence Program. She served both as an Advocate and Project Coordinator until she was appointed to serve in the role of the Intergovernmental Affairs Liaison for the Hopi Tribe to both state and federal governments. After serving nearly six years in the tribal government, her career moved toward higher education at The University of Arizona and tribal public policy training at The Morris K. Udall Foundation for Excellence in Environmental Studies and Public Policy. Monica has served on several nonprofit boards including Native Americans in Philanthropy, Native Public Media, the Arizona Grantmakers Forum, the Founding Trustee to the Native American Agriculture Fund, and Board member of the Arizona Alliance for Nonprofits.