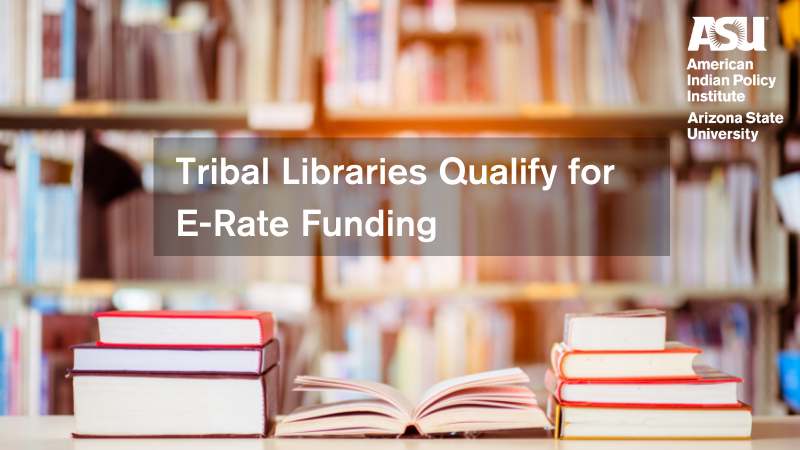 Tribal libraries are often located in remote areas and can serve as community institutions expanding broadband access. Only about 21 percent of people on Tribal lands have broadband access.

Tribal libraries vary across the U.S. and are often defined by the communities in which they reside. In its most basic definition, a Tribal library is a space on a reservation, in which a concept of a library exists and Tribal members acknowledge and recognize it exists. Tribal libraries function to support the unique needs of the community. It can range from a small shelf of books in a hallway, to an entire building dedicated specifically to the purpose and function of a Tribal library. Overarchingly, Tribal libraries supply services to help users obtain information and access the Internet. They provide free resources and programs that uphold and preserve the Tribal culture and language. Tribal libraries often contain archival collections and can be essential to promote education in their communities. With the recent events of the COVID-19 pandemic, Tribal libraries are more vital than ever. Tribal members are taking advantage of critical library resources for online job searches, filing unemployment, obtaining telehealth and participating in online classes and programs

E-Rate subsidies range from 20 perecent to 90 percent of the cost of broadband service. Recognizing the importance of broadband for education, the federal government established E-Rate for schools and libraries in 1996. The National Congress of American Indians passed a resolution in 2014 calling on the FCC to establish a Tribal priority for E-Rate funding for Tribal libraries. This has not happened, but the recent rule change is a step in the right direction. In 2018, Congress updated the Museum and Library Services Act to include Tribal libraries, making them eligible for support from State library administrative agencies.The FCC action aligns E-Rate eligibility with the 2018 Act.

The new FCC definition puts power in the hands of Tribes: Tribal councils can now designate what facilities count as a Tribal library. The only requirements are that the facility has “(1) regularly scheduled hours, (2) staff, and (3) materials available for library users.” By empowering Tribes, the FCC action respectsTribal sovereignty: Tribes now have control over what counts as a Tribal library.

“As one of the advocates that have been working for years to change this rule that excluded Tribal libraries, I’m very pleased to see that the FCC changed the rule to be inclusive of Tribal libraries. The broadband access provided by this rule change could have been a game-changer for communities and individuals during the pandemic lockdown. It could have saved lives.”

This rule change represents another step in closing the digital divide and AIPI recognizes the years of hard work from Tribal leaders, community organizations, and agency staff to make it happen. Please continue to follow AIPI for the latest developments on Tribal broadband.