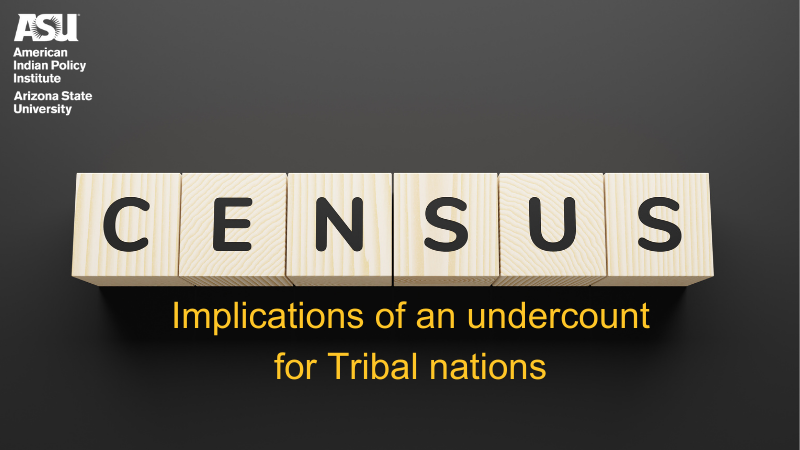 The 2020 Census undercount poses challenges to Tribes. The expanded outreach of the 2020 Census was no match for the obstacles created by COVID-19, and American Indians and Alaska Natives living on reservations were once again undercounted. This time by 5.6 percent. In 2010, the undercount was 4.9 percent. The 2020 Census is key to Tribal planning decisions and funding opportunities.

In an NCAI news release, President Fawn Sharp of the National Congress of American Indians stated, “Every undercounted household and individual in our communities means lost funding and resources that are desperately needed to address the significant disparities we face."

Official population counts are used when applying for federal funding and philanthropic grants. It can be hard to show community need when a significant portion of the population does not appear in the Census numbers. Tribes also often use the Census counts internally to plan for community development. An undercount may result in misallocated resources as sections of the population in certain areas were missed by the Census. All together these issues make key decisions, such as broadband planning, difficult in the coming years.

Additionally, Tribes that want to work with state governments to access broadband funding may find new hurdles. The federal government uses the Census as the basis for allocating funding and resources to State programs. States then often do the same for distributing funding to county governments. County funding is particularly important when discussing checkerboard reservations. These are reservations where the Tribal land base is broken into small pieces, and counties have more influence on big-picture infrastructure projects and programs. This state funding structure is especially relevant this year with state broadband grants on the table through the Broadband Equity, Access, and Deployment program (BEAD).