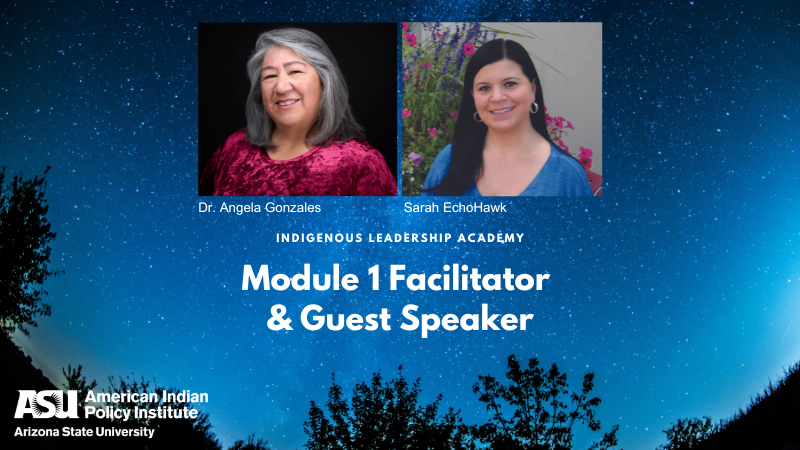 The Indigenous Leadership Academy (ILA) is set to begin this week. This cohort of participants represent 15 tribes from 8 states and Washington D.C. This is a benchmark for the ILA and we are excited to share our journey. The 10 module program is designed with guest speakers for each module. These guest speakers have expertise in their field which directly relates to each module. For module 1 we are delighted to have Dr. Angela Gonzales as our facilitator. She is also a Thought Leaders Fellow at the American Indian Policy Institute. Sarah Echohawk, CEO of AISES  will be the first guest speaker for ILA. You can read more about the facilitator and guest speaker below.

Angela Gonzales (Hopi) is an Associate Professor in the School of Social Transformation and inaugural Fellow in the American Indian Policy Institute’s Thought Leaders Program at Arizona State University. As a community-engaged, interdisciplinary scholar, her research interests cut across and integrate the fields of Sociology, Indigenous Studies, and Public Health. Over the past two decades, she has engaged in a number of community-based research projects with tribal communities. Her research has been supported by the National Institutes of Health, the National Science Foundation, and the Ford and Russell Sage Foundations. Dr. Gonzales holds a Ph.D. in Sociology from Harvard University, a master’s degree from the Harvard Graduate School of Education, and a bachelor’s degree in Sociology from the University of California, Riverside. She currently serves on the Board of the Colorado Plateau Foundation, a Native-led foundation that invests in Native-led organizations working on the protection of water and sacred places, preservation of Native languages, and sustainable community-based agriculture. She is also the current President of the Society of Senior Ford Fellows and Chair of the American Sociological Association Section on Indigenous Peoples and Native Nations. As an enrolled member of the Hopi Tribe from the Village of Shungopavy, she is committed to research that supports participatory research to develop community capacity and relationships of trust and reciprocity between tribal partners and academic researchers.

Sarah Echohawk, a citizen of the Pawnee Nation of Oklahoma, has been working on behalf of Native people for over 20 years. She has been the Chief Executive Officer (CEO) at AISES, an organization dedicated to Advancing Indigenous People in STEM, since 2013. Prior to joining AISES, Ms. EchoHawk was the Executive Vice President at First Nations Development Institute. Previously, she also worked for the American Indian College Fund, and as an adjunct professor of Native American Studies at Metro State University of Denver. Ms. EchoHawk serves/has served on several boards and committees for multiple organizations and initiatives including the American Indian Policy Institute, Last Mile Education Fund, National Girls Collaborative, Native Americans in Philanthropy, Native Ways Federation, Red Feather Development Group, and Women of Color in Computing Research. She is also a member of the ad hoc committee at the National Academies of Sciences, Engineering, and Medicine for a project addressing the underrepresentation of women of color in tech and serves as PI/Co-PI on multiple National Science Foundation (NSF) grant funded projects. Previously, she served as an Ambassador for the U.S. Department of Energy’s Minorities in Energy Initiative. Ms. EchoHawk has a Master of Nonprofit Management from Regis University and a Bachelor of Arts in Political Science and Native American Studies form Metro State University of Denver.