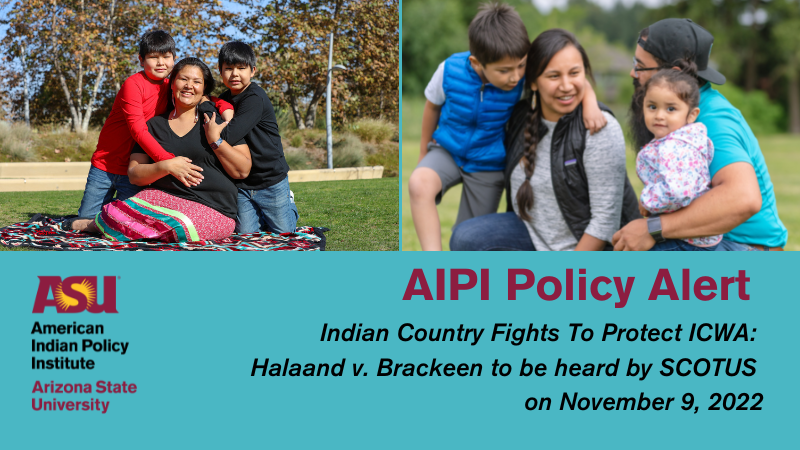 Indian Country Fights To Protect ICWA: Haaland v. Brackeen to be heard by SCOTUS on November 9, 2022

On November 9, 2022, the Supreme Court of the United States (SCOTUS) will hear the alarming case, Haaland v. Brackeen. The questions of the case are (1) whether the Indian Child Welfare Act (ICWA) interferes with a State’s power over adoptions and foster care and (2) whether the ICWA unfairly limits adoptions by parents who are not members of the Native child’s tribe. The case is alarming because of its potential to upend the foundations of culture and Indian Law.

Enacted in 1978, the Indian Child Welfare Act is a Federal law that protects the well-being and best interests of Native children and families, a principle that is at the core of the Federal Trust Relationship. The law was enacted in response to the staggering rate that Native children were removed from their families and Tribes by state welfare agencies and private adoption groups. The ICWA prioritizes keeping Native children connected to their community and culture by establishing rules that ensure Native children who are removed from their families are placed with extended family members or Native foster homes. It reaffirms the political status and inherent sovereignty of Tribal nations by recognizing that Tribes have a right to participate in child welfare matters involving their citizens.

In March 2018, several States and individuals (collectively “Brackeen et al.”) filed a complaint in the United States District Court for the Northern District of Texas challenging the constitutionality of several provisions of the ICWA. The District Court ruled in favor of Brackeen et al., striking down portions of the ICWA as unconstitutional. In April 2021, the ruling was appealed and brought to the U.S. Court of Appeals for the Fifth Circuit. The Fifth Circuit Court of Appeals affirmed in part and reversed in part the District Court’s ruling. In September 2021, Deb Haaland, in her official capacity as the Secretary of the Interior, appealed the case to the Supreme Court for review.

If SCOTUS finds the ICWA provisions to be unconstitutional, critical prioritizations of the cultural and familial ties of Native children will lose federal protection in cases of adoption and foster care. Invalidation of the ICWA will result in Tribes being vulnerable to loss of cultural identities, values, and practices through assimilation of their youth in non-Native adoption or foster care situations.

Further, the consequences of a ruling in favor of Brackeen et al. affects more than just Native youth and the upholding of the ICWA. At stake in this case, as Indian Country also saw in the cases of McGirt v. Oklahoma and Oklahoma v. Castro-Huerta, is the preservation of long-standing principles of Federal Indian law and Tribal sovereignty. If SCOTUS affirms the constitutionality of the ICWA, it will reaffirm the enduring understanding of Tribal Nations maintaining a political status as opposed to a racial status, as first held in the case of Morton v. Mancari. The potential impact of SCOTUS finding the ICWA to be unconstitutional is that it will change Tribal sovereignty as it is commonly understood and allow for vulnerabilities of future attacks on Tribal Nations' inherent right to govern themselves. In short, it will erode the foundations of Federal Indian law.

This critical case before the Supreme Court has monumental implications. Therefore, many groups have filed amicus briefs voicing their support for both parties. Below is a list of key supporters who have filed and/or signed on in support of these briefs:

For the full information on those in support of the petitioner and respondent, see the amicus briefs, here.