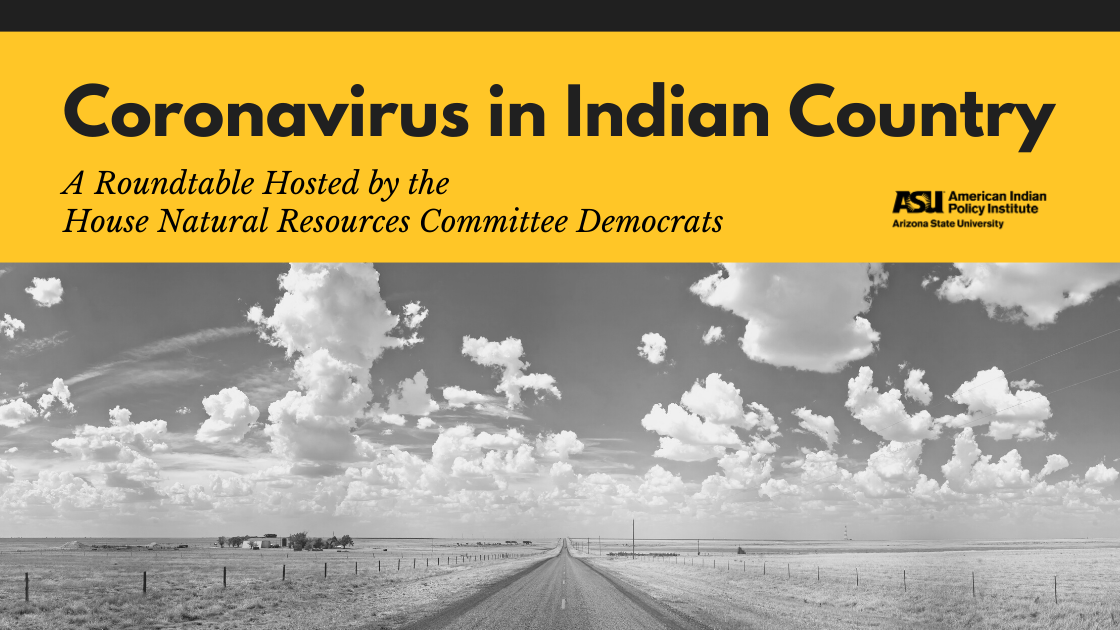 In the fight against COVID-19, tribal nations face many of the same health, education, and economic public policy challenges as non-Native state and local governments. However, they are further hindered by an obstacle course of red tape and administrative misapplications from the federal government that prevents tribes from fully utilizing their sovereign authority and hamper their pandemic defense and recovery strategies. This is an area that some U.S. representatives feel deserves the full attention of Congress and the Administration.

The House Natural Resources Committee Democrats hosted a virtual roundtable discussion this morning in which members of The House of Representatives listened to leading experts from Indian Country about how federal relief support could be improved to provide tribes with the resources and flexibility they need to provide for their people.

The roundtable was hosted by Rep. Ruben Gallego (D, AZ-7). Other members of Congress on the call included Rep. Deb Haaland (D, NM-1), Rep. Matt Cartwright (D, PA-8), and Rep. Darren Soto (D, FL-9). They heard from Kevin Allis, CEO of the National Congress of American Indians (NCAI), Dante Desiderio, the executive director of the Native American Finance Officers Association (NAFOA), and Walter Murillo, president of the Board of Directors for the National Council of Urban Indian Health (NCUIH). Murillo is also the CEO of Native Health in Phoenix, AZ. Desiderio is a member of the American Indian Policy Institute Advisory Board.

Watch the video below:

Highlights from the Call

A top point of discussion is the mishandling of CARES Act relief funding, which was allocated to tribes over seven weeks ago and has still not been fully deployed to tribal governments.

Desiderio said the deadline to deploy the full $8 million was April 30. The first 60 percent of that funding went out after the deadline and the other 40 percent has not been released yet; it may not be until June. He said, the inequity of tribes vs. the general public is amplified by the slow response to the crisis in support of tribes.

Allis added that the Administration’s dubious interpretations of the language in the bill caused unnecessary hindrances. He said that upcoming bills will need to include clarifications so that funding is delivered in a reasonable timeframe. He added that the agencies tasked with deployment of the funds lacked relationships with Indian Country and demonstrated a lack of understanding of the trust relationship and how to apply it properly.

Desiderio added that tribes are not satisfied with the population data that was used to calculate tribal allocations. The population formula used data from the Housing and Urban Development, which is not representative or accurate of tribal populations. Some tribes, he said, were listed as having a population of zero.

Rep. Cartwright asked, what regulatory flexibility do tribes need and what are the current barriers to using federal aid? Desiderio responded that the main problem with the CARES Act deployment of funds is in how agencies should be interpreting the law. He said agencies should provide flexibility in how tribes utilize the relief funding. Unlike states, tribes have had their government revenue completely stopped and they need flexibility to make up lost government revenue. He said there must be an understanding that tribes do know what’s best for their communities. Restrictions on tribes’ ability to tax prevents them from a common source of public revenue. This forces tribes to turn to private industry to generate revenue for essential government functions.

Rep. Haaland asked, how has tribal response efforts been hindered by the chronic lack of broadband infrastructure? Why do tribes need direct access to spectrum? Allis noted that more than half of Indian Country does not have adequate broadband access, meaning students can’t access school, tribal justice systems are unable to hold tele-conference hearings, and tele-health is impossible. Desiderio said that the The COVID-19 DISASTER in Indian Country Act, introduced by Rep. Haaland last week, takes an important step toward giving tribes access, but tribes need federal agencies to grant them flexibility to act independently. Tribes are sovereign and they know best how to serve their people, that’s why they need to own the spectrum over their lands.

Some states are reopening after weeks of shutdowns. Meanwhile, tribes continue to see the number of COVID-19 cases climb and are continuing to enforce closures and curfews. Rep. Soto asked about some tribes who have chosen to close their roads. Specifically, in South Dakota, Gov. Kristi Noem demanded that the Cheyenne River Sioux Tribe and Oglala Sioux Tribe remove checkpoints regulating traffic through their reservation. The barriers are intended to prevent the spread of COVID-19 on their lands. Desiderio said, “The tribe is doing everything it can to…protect its people and that’s a fundamental right that should be respected.”