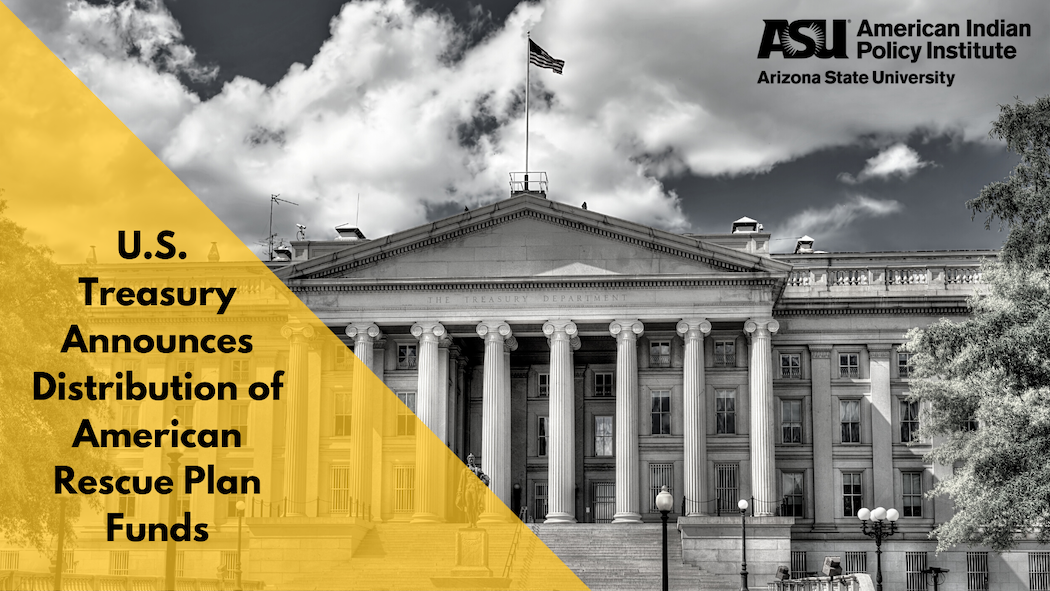 The American Rescue Plan Act (ARPA) granted a total of $31.2 billion to Indian Country, including the agencies that serve Tribal nations. The bill was signed on March 11, 2021 and directed the U.S. Treasury to distribute $20 billion directly to Tribal governments through the Coronavirus State Fiscal Recovery Fund. The legislation gave broad discretion to the Treasury by stating that, “(i) $1 billion is to be allocated equally among eligible Tribal governments and (ii) $19 billion is to be allocated to Tribal governments in a manner determined by the Secretary of the Treasury.”

The Treasury held five Tribal consultations on the distribution of ARP funding throughout March and April in order to gather Tribal input on how to distribute the remaining $19 billion appropriated in the act. The Treasury released their distribution plan on May 10, 2021, and it consists of:

The Treasury states in its distribution plan that funding will be distributed in two payments.The first payment will equally divide $1 billion, and the second payment will distribute funds based on enrollment and employment data.

The Treasury also released its Interim Final Rule which outlines the rules regarding the ARPA funding. Generally, the rule states that ARPA funding may be used to address the following areas:

The rule states that Tribes have broad flexibility to determine how spending can be used to meet the needs of their communities. The rule is currently under review to be published in the Federal Register. Please check AIPI’s Monthly Policy Updates for more information on the rule’s final publication in the Federal Registry.

These rules underscore the importance of infrastructure in preparing for future pandemics: water, sewer, and broadband are key. NCAI highlighted in their Infrastructure Legislative Proposal how 12.5 percent of American Indian and Alaska Native households do not have adequate sanitation facilities. At the same time, the FCC’s 2021 Broadband Progress Report estimates that 20.9 percent of households on Tribal lands do not have access to broadband service. Coordinating the development of water, sewer, and broadband infrastructure can save costs in the long run for Tribal governments. These types of projects often require access to the same rights-of-way and easements, and coordinating the construction of this infrastructure can reduce administrative costs.

There are several other COVID-19 federal programs that can support Tribal broadband initiatives. These opportunities are summarized in a recent Congressional Research Service report. More information on Tribal broadband funding is available at AIPI’s Tribal Broadband Resources page.