We Were Here First: Indigenous Leadership Guidance from Geoff Blackwell 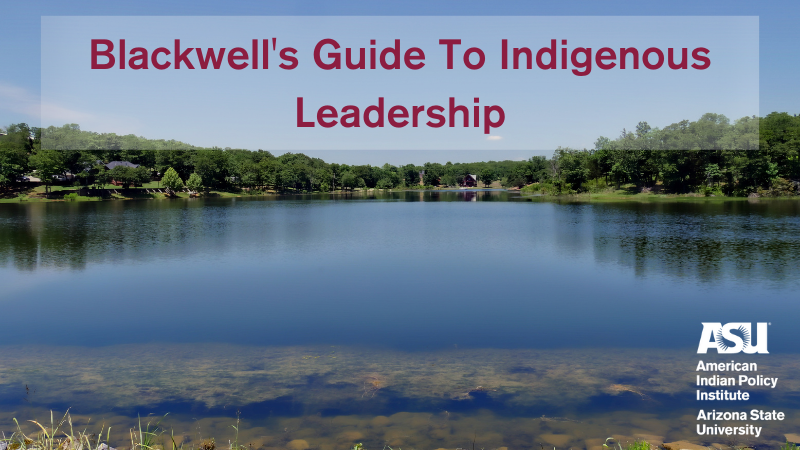 On the winter evening of February 25, 2022, Indigenous leaders from throughout Arizona sat down in front of their devices to commence module five of the American Indian Policy Institute’s (AIPI) Indigenous Leadership Academy (ILA). The inaugural cohort had seen continuous growth in the previous four weeks in familiarity, inspiration, and knowledge. As the fifth ILA zoom meeting got underway, the momentum was palpable, and for good reason. With Geoffrey Blackwell as the guest speaker, the cohort was in for an exhilarating evening.

Over the course of the COVID-19 pandemic, Indigenous peoples paused on participating in many invaluable cultural events that focus on the importance of togetherness and community. Although resilience is something the Indigenous community is more than familiar with, the absence of the commonplace closeness usually experienced has been unmistakable. Over the course of the Indigenous Leadership Academy, although virtual, Indigenous leaders have had the opportunity to connect with each other in a way that has been lacking. Geoff Blackwell’s presentation only elevated this connection. In a time when Indigenous communities are craving intimacy, Blackwell made the cohort feel right at home in whatever sense that meant for each of them.

What does it mean to be an Indigenous leader? How do you reconcile your identity as a leader with your identity as an Indigenous person? What does leadership look like within and outside of the Indigenous community? These are some of the unique topics addressed throughout the Indigenous Leadership Academy. During Blackwell’s guest presentation, his unparalleled experience allowed him to illuminate more than a few sage pieces of advice that help to answer these questions.

Blackwell began his presentation with a brief introduction on his work and personal history. He was inspired by his family’s work in Indian Country going back four generations on both sides.

As the cohort sat rapt with attention Blackwell expounded on at least 25 points of advice for leaders, but three really rose above all and will be discussed here. 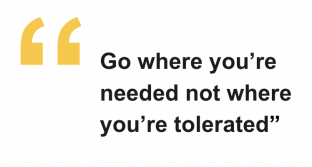 First, Blackwell stressed, “go where you’re needed, not where you’re tolerated.” Blackwell learned the importance of this piece of advice while first working for the Federal Communications Commission (FCC). As the first enrolled member of a federally recognized tribe to work for the FCC, he soon discovered that they “did not evenknow what an Indian was” or “what a reservation was” in the senseof the broad intersection of federal law and policy. In the face of adversity and ignorance surrounding his identity, Blackwell could have thought he just did not belong–but this was not the case. The attitude of the FCC could have been the difference to make him change his career path or minimize his identity as an Indigenous person and an Indigenous leader but instead, he used this as an opportunity to “go where he was needed,” and that action was one of many precursors to the relationship the FCC has with Indian Country, today. By going where he was needed, Blackwell changed the personality of an entire governmental organization.

The second distinct piece of advice was, “sometimes you have to go away to comebackhome.”Corresponding to the previous point of advice, Blackwell stressed the importance of Indigenous leaders being sure to insert themselves into spaces that are outside of what would be typical comfort zones for Indigenous peoples. As opposed to remaining in spaces where Indigenous leaders may be comfortable because they are considered “acceptable” for Indigenous persons to go, sometimes going away from those spaces is necessary in order to return as more perceptive leaders. He explained that for some people if you are going to lead your community you have to go somewhere outside and away first and foremost. Blackwell connects this piece of advice with his time in law school in Boston. He explains that he had the opportunity to learn things “the hard way” during his time at law school and how that positively affected his ability to lead “at home”. By “going away”, the benefit is to learn things the hard way, not at home, and not where you are going to make a large impact. Learning the hard lessons while you are away is paramount so that when you come back, you are ready and can be the most beneficial leader possible.

Finally, Blackwell posed that Indigenous leaders need to be sure to “get skilled at the ‘table.’” This metaphor is in reference to the political “table” of relevance and consideration by governmental entities. Indian Country is currently in an unprecedented time. In the past, opportunities for such consideration by governmental entities were scarce and sporadic. Now, with significant focus, energy, and dollars being spent on Indigenous issues in the last few years, the “table” and our “seat” at it, is everywhere, and in order to be fully recognized and maximize our position “at the table,” Indigenous leaders must be skilled at it. They must be proactive as opposed to reactive, and communication capabilities are critical. Blackwell explained that they must come to the table with their ideals and values and say “This is a trust relationship. We have these contracts and treaties with the federal government and every single one of them has been broken.” That cannot be forgotten. He stressed that the uniqueness of being an Indigenous leader is in navigating through not only your Indigenous culture but other cultures as well. Such navigation includes acquiring knowledge regarding what exactly someone’s motivation is. Whether it be your friend, colleague, ally, or enemy. Recognizing others' motivations while being able to explain your own motivation and your own needs is an invaluable leadership skill. It is of critical importance to become both a good business and a good cultural leader, and this is especially urgent now that Indigenous leaders have a seat at the table with United States leadership, federal government agencies, congress, and states.

At the conclusion of the presentation, Geoff Blackwell took the time to receive questions and comments, many of which included commendable statements from the cohort. This presentation was heartening. It was auspicious. It was visceral. While the subject of leadership in Indigenous communities can come with difficulties such as internal conflicts, adversity, and compromise, this presentation renewed the resilience and optimism needed for the growth of the Indigenous leaders of the inaugural cohort of Indigenous Leadership Academy at the American Indian Policy Institute. It is leaders such as Geoff Blackwell that continue the growth and nurturing for generations of Indigenous leaders to come.